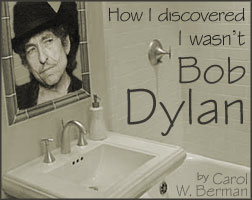 I knew we were twins when I first saw Dylan’s poster in the head shop on Hollywood Boulevard last year in ’68. That long, pale, misshapen face, the eyes narrowed by cigarette smoke, the full, chapped lips holding the cigarette, his curly, unruly hair. He was glaring out from the photo wearing an old, brown suede jacket. The shop was full of day-glow-painted posters twinkling in the black lights. By the way the two freaks to my left craned their necks at weird angles, gawking at the posters, I could tell they were hallucinating their brains off. Not me, I was perfectly straight that day, except for a few hits off a small joint.

I’d never had a sister or father that I knew of, but I had a twin. He was thirty years old. I was a sixteen-year-old girl. Besides looking exactly like Dylan, I could sing just like him. The most thrilling thing of all was that I would see my twin live at the Hollywood Bowl in a week!

The day of the Dylan concert all seven of us were crammed into the old Chevy we used for Driver’s Ed. Mr. Maley, the instructor, insisted on sitting up front, squeezed between Sally and Tim, where the air-conditioning was the best. I was in the back up against the door with Janine, Pedro and Bob to my right. No one could escape my song in the tight space: “To be stuck inside of Mobile with the Memphis bluu..es again…”

Janine, that sick motherfuck from Oklahoma next to me, stuck me in the ribs with her bony elbow. “Shut up,” she complained. “I can’t stand to hear you wailing like that.”

“It’s Dylan from Blonde on Blonde. Don’t you know anything?” I sneered. In school, only the hippest kids knew of his existence. I was determined to join that group to exclude Janine who always snubbed me. She was a Twiggy-shaped blonde who wore the shortest miniskirts and strutted around school waving her ass. The looks the guys gave her were sickening.

“Pay attention,” Mr. Maley yelled. “As we enter the freeway, we speed up to blend with traffic.” He didn’t want to get between me and Janine in our tenth fight that semester. He ignored us.

The part where we accelerated and zoomed into the pulsating lanes of traffic always gave me a rush. Sally’s knuckles turned white as she turned the steering wheel just in time to miss sideswiping a red Jaguar convertible. We laughed as hard as we could in the back seat.

“The ragman draws circles up and down the block,” I sang exuberantly to celebrate our survival.

Janine turned to Pedro, who was so cute I almost couldn’t bear to look at him. His white teeth gleamed in beautiful contrast to his dark brown skin. His black hair was in a Beatles’ cut. “Did you ever have sex in the back seat of a car?” she asked loudly, trying to drown me out. No wonder the guys drooled.

“Yeah, man, all the time,” Pedro said. I knew he was lying by the way he grinned at her. I’d never had sex yet, but I knew my twin was getting it on all the time. Rock stars did nothing all day but have sex, shoot dope and sing according to KFWB, my favorite radio station. I was hoping that that night my twin and I would meet, face to face, and we would groove on each other completely.

Finally I was out of that cramped car. At home I dropped the tab of acid I’d been thinking about all day long. I lined up Blonde on Blonde and Bringing It All Back Home to listen to while I tripped. When I came on to it, the whole bedroom lit up as if a lightning bolt had struck. My dresser which looked like a cube of solid honey melted onto the floor. I forced myself out of bed to investigate. In the mirror I saw Bob Dylan. We had merged to form one person: kind of like the positrons and electrons we’d studied in physics – – only we didn’t annihilate each other.

It was 7 p.m. – one hour before show time at the Hollywood Bowl. I pulled on my old brown suede jacket I’d picked out at the thrift shop, like the one on Blonde on Blonde. I messed up my hair even more and flew out the door. My mother, who was too busy screwing her brains out with her various boyfriends to ever miss me, certainly wouldn’t that night; and I wouldn’t have to feel lonely or pissed off at her ever again, since I was Bob Dylan.

I went over to the corner and stuck my thumb out towards heaven. A Volkswagen pulled over after a few minutes. Inside a long-haired, older woman in wire-rimmed glasses smiled and asked: “Where to?”

“I’m going to my concert at the Hollywood Bowl,” I told her as I sank into the passenger seat.

“What concert is that?” she asked, glancing quickly at me. Was she dimwitted? Couldn’t she see I was Bob Dylan?

I narrowed my eyes. “Dylan.”

“He’s playing tonight, isn’t he?” I could have told her, yeah, I was playing, but I thought it was better for her to figure it out herself. While she was driving she gave me some funny, sideways glances. Then I realized who she was! She was the “sad-eyed lady of the lowlands.” Imagine pretending not to know me.

I bummed a cigarette, so I could look more like my latest poster. Odd, that she didn’t ask why I was hitchhiking to my own concert.

“Let me off here!” I demanded. As she stopped the car, I asked: “You want my autograph?” I was coughing from that unfiltered Camel she’d given me.

“Why would I want your autograph?” She turned to stare at me. Her eyes were like glass and her mouth was mercury.

“Thanks for the ride. I’ll remember you,” I promised. I would play “Sad-eyed lady of the Lowlands” for her.

It was winter and already dark. My suede jacket wasn’t warm enough and I was shivering. Four blocks more to the Hollywood Bowl. All I had to do was slip into the Bowl through a back exit. I wondered if I was late. I didn’t see the black limo until it knocked me down. The car door opened. Light poured out. The universe split apart as I lay there. The first thing I saw was his black cowboy boots, then tight black jeans, the old, brown suede coat. His pale face glowed and his cigarette smoldered.

“Are you 0.K.? Aren’t you that groupie who gave me a turquoise belt buckle back in Tucson?” he asked in his sexy, gravely voice.

I couldn’t speak because he’d already spoken, and how could I speak with a different mouth? When the positron and electron came together, energy was released. Waves of energy flowed between us.

“Mr. Dylan, we must get going. It’s show time already!” a voice urged from inside the limo.

“Hey, Joe, there’s a kid who looks just like me out here. We just ran her over,” Dylan said.

“You like that song? Come on, kid. You can sit backstage while I sing it.” He grabbed my arm and helped me into the limo. We both sank back into the soft leather seats as we zipped off. I tried not to look at him as we rode: the paradox of his presence was hard on my eyes.

When the limo stopped, I jumped out. As I climbed up the stairs to the stage door, I could hear them announcing: “Ladies and Gentlemen, the one and only, Mr. Bob Dylan!” I ran to center stage and grabbed the mike in front of the band playing the intro to “Blowin’ in the Wind.” The blinding lights shone into my eyes. I reveled at the universe which had given me back my twin self. I opened my mouth to sing, absorbing the rush of vibes from the audience. Two burly men from back stage ran towards me.